History
Karate, as we know it today, originated on the Ryukyu Archipelago, more commonly known as the Island of Okinawa, (Birthplace of Karate), Japan. The major sites were the villages of Naha, Shuri and Tomari.

There are no known authentic pictures of:
Sakugawa Kanga "Tode"
Matsumura Soken "Bushi"

The traditional Kata (forms) have been handed down from instructor to student. To quote Chibana Sensei, "Karate is teaching Kata (form) we have taken from forefathers without changing it at all." There are 15 traditional Katas and in Kobudo (Okinawan Art of Weaponry) there are 6 weapons with individual Katas for each weapon. 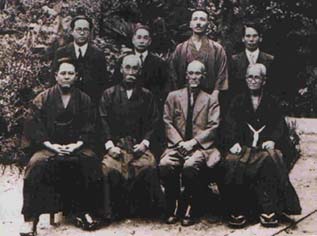 Okinawan Karate dates to the sixth century when Bodhidharma's (Daruma), born in India, travels took him to China where he settled at a Shao-lin (Shorin in Japanese) Monastery. The introduction of ch-uan-fa ("fist way") occurred in the late 1300's with the expansion of trade and cultural exchanges between Okinawa and China. Evidence suggests that te ("hands"), in fact, was indigenous to Okinawa, (the birthplace of Karate), developing in the villages of Shuri, Naha and Tomari. Thus begins the lineage of Shorin-Ryu Kobayashi Karate from the Shuri-te system.

TAKAHARA, Peichin (1683-1760)
was revered as a great warrior and is attributed to have been the first to explain the aspects or principles of the word do ("way"). These principals are: 1) ijo, the way-compassion, humility and love. 2) katsu, the laws-complete understanding of all techniques and forms of karate, and 3) fo dedication seriousness of karate that must be understood not only in practice, but in actual combat. The collective translation is: "One's duty to himself and his fellow man." Most importantly, he was the first teacher of SAKUGAWA, Kanga "Tode" who was to become known as the "father of Okinawan karate."
KUSANKU, (AKA: Kung Syanag, Koso Kun)
is a Chinese diplomatic title. This emissary was a military official, who traveled to Okinawa, as documented in 1761. He instructed "Tode" after the death of TAKAHARA, SAKUGAWA's first instructor. KUSANKU's name is associated with several katas in the Shorin-Ryu styles.
SAKUGAWA, Kanga (1733-1815)
"Tode" meaning "karate," was a nickname given to him by his eminent instructor TAKAHARA. Known as the "father of Okinawan karate," SAKUGAWA traveled to China to study the fighting arts. During this time he is attributed for combining the Chinese art of ch-uan fa and the Okinawan art of tode ("Chinese hand or empty hand"), forming Okinawa-te ("Okinawa hand") which would become the foundation for Shuri-te. He passed down Kusanku, which is said to be one of Okinawa's oldest katas. Furthermore, he developed a bo kata, Sakugawa no Kon.
MATSUMURA, Sokon (1796-1893)
"Bushi" ("Warrior") it is acknowledged, began his training at an early age under the tutelage of SAKUGAWA, "Tode" and made several trips to China to further study the fighting arts. He is credited, by several sources, for making the most singular contribution, katas, to the development of Okinawan karate. The Shuri-te system of katas that are still practiced today in the Kobayashi Shorin-Ryu system are Naihanchi I-III, Passai Dai, Chinto & Gojushiho.
ITOSU, Yasutsune (1830-1915)

"Anko" ("Iron Horse") trained under MATSUMURA, Sokon and is credited for introducing the Pinans ("Peaceful Mind") I-V Katas to the Okinawan public schools in 1901. He is also credited for Kusanku Sho and Passai Sho. Some of the most important modern day instructors that trained directly under him were: CHIBANA, Chosin, FUNAKOSHI, Gichin, KYAN, Chotoku, MABUNI, Kenwa to name just a few.
CHIBANA, Chosin "Hanshi no Sogo" (1887-1969) 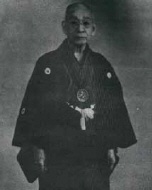 was one of Itosu's top students. CHIBANA Sensei was the first to differentiate his system of karate from others by naming it Kobayashi-ryu ("young forest" style), in 1930, instead of Shuri-te or by his own name (e.g. Chibana-te) as had been done in the past within the Shorin-ryu systems. This decision was brought on by the growth and development of te, not only on Okinawa, but also with the foresight of international introduction. CHIBANA Sensei was one of the founding committee members of karate masters in 1936 that agreed karate should be translated as "empty hand."

In addition, he was awarded the Fourth Order of Merit from the Emperor of Japan, in 1969, for his life long contributions to the martial arts. It is attributed by some sources that he passed down the Kusanku Dai and Gojushiho katas. CHIBANA Sensei's most influential student of the modern day is Hanshi JuDan NAKAZATO, Shugoro, to whom CHIBANA Sensei presented his personal black belt, which was a great honor and tribute to NAKAZATO Sensei's devotion and martial arts skills.

Hanshi JuDan NAKAZATO has spent most of his life in the martial arts and in 1967, after nearly twenty years of training, was awarded 9thDan by his eminent instructor CHIBANA Choshin. Upon CHIBANA Sensei's death in 1969, NAKAZATO Sensei became the president of the Okinawan Shorin-Ryu * ShorinKan Karate-do Kyokai and was promoted to 10thDan in 1980. NAKAZATO Sensei is one of the most influential living karate Grand Masters in Okinawa and travels many times a year to promote the traditional Okinawan Shorin-Ryu * ShorinKan Karate (Kobayashi-ryu) system.

Hanshi JunDan headed the Okinawan karate delegation and was asked to give a special performance at the 1996 Olympic Games held in Atlanta, Georgia. Most recently in May 1999, he led an Okinawan seminar delegation of Grand Masters to the United States promoting The 1st Okinawa Traditional Karatedo & Kobudo World Tournament. In addition, Hanshi JuDan NAKAZATO is credited for the introduction of the Gorin kata.

In August 2000, the Okinawan Prefecture Board of Education bestowed upon Hanshi NAKAZATO the title of "Kenmukei Bunkazi" - Intangible Cultural Asset. In addition, on November 4, 2007, the Japanese Prime Minister under the hand of the Emperor of Japan awarded Nakazato Sensei the "Order of the Rising Sun with Gold and Silver Rays" - Asahi Soukou sho.

In addition, his annual November Camp, Noujaim's Cal South International Martial Arts Camp draws from all the martial arts disciplines. The 2003 CAMP was honored to have Nakazato Sensei as the Guest of Honor along with his son,  Minoru Nakazato sama and several ranking kyoshis from Okinawa.

This brief synopsis of Okinawan Karate history is nothing more than just that, brief. Please refer to the references listed on the home page and/or your own library and resources.